War heroes march in Kaukauna parade, 1918. One of many photos restored and archived at the Kaukauna Public Library, thanks to a grant from the new Kaukauna Local History Collection Fund.

The Kaukauna Area Historical Society will be able to help preserve Kaukauna’s history forever, thanks to a $34,000 bequest from the estate of the late Ruth Derus. The organization used part of the gift to establish a designated endowment fund within the Community Foundation called the Kaukauna Local History Collection Fund, which supports the maintenance and development of the Kaukauna Public Library’s Kaukauna local history collection. 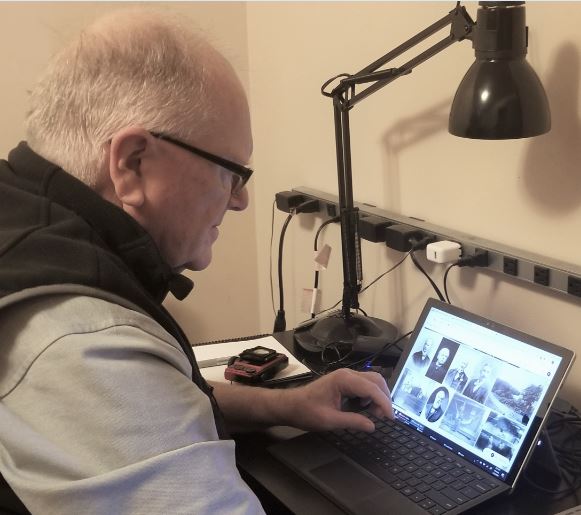 “This new fund is certainly unique, in that a nonprofit established it for the purpose of supporting another nonprofit organization,” says Michelle Lippart Hardwick, director of Gift Planning at the Community Foundation.

The fund’s initiator, Craig Lahm, is the president of the Kaukauna Area Historical Society and former director of the Kaukauna Public Library.  When a lawyer called him about the gift, Lahm initially thought the bequest would be for a few hundred dollars, but first received a $30,000 check and later a $4,000 check. “It was an absolutely wonderful surprise to receive this bequest, which made it possible to keep Ruth’s and her husband David’s names as well as Kaukauna’s history archives alive for many years to come. We are especially grateful to be able to create a permanent fund at the Community Foundation. Their staff made it easy to set up the fund that will permanently benefit our community,” says Lahm. Not much is known about Ruth Derus. David Derus was born in 1931 in Kaukauna, and graduated Kaukauna High School in 1948. He was Professor of English Literature at the University of San Francisco until his retirement in 1992. Dr. Derus was a published poet including works touching on his youth in Wisconsin. He was married to his wife Ruth for 52 years until his death in 2012 at age 81. Ruth Derus died in San Francisco in 2018 at age 88.

The Derus bequest has been distributed three ways: First, a grant to the Kaukauna Public Library to purchase software to preserve the library’s photo archive and the purchase of a new microfilm reader and computer. Second, a grant to Kaukauna’s Grignon Mansion to help hire a new executive director. Third, money to set up the fund within the Community Foundation to support the library’s collection of local history. Mr. Paquin Taxi Service from the Railroad depot on the southside of Kaukauna, 1895

“David and Ruth had no children and we do know both were very interested in preserving Kaukauna’s history,” says Lahm, who points to David’s membership in the historical society at one time. “Their legacy will forever help preserve history in Kaukauna, including perpetual support for the maintenance and development of the Kaukauna Public Library’s Kaukauna local history collection, where documents and books regarding Kaukauna’s history and more than 5,000 historical photos are archived.”

Adds Lahm: “I am a great fan of the Community Foundation and the opportunities its provides for those who want to a make a permanent and lasting impact in our various communities.”

Interested in exploring a fund at the Community Foundation? We have a variety of flexible fund options. Check them out here.