Celebration of Volunteerism was born of tragedy Each spring, hundreds of residents of Wisconsin’s Fox River Valley fill the area’s largest banquet hall for an awards gala that celebrates people who make the community a better place by helping and serving others, with no expectation of payment or prestige in return.

The late Paul and Elaine Groth were such people. They were the inspiration for this uplifting annual event called “Celebrating Volunteers,” though they were never able to attend. The Fox Cities community leaders were killed in a car crash on April 30, 1997, in Green Bay.

A circle of the Groths’ friends created Celebrating Volunteers to honor the couple’s dedication to volunteer service. “We wanted to help people turn it into a positive memory of Paul and Elaine and get past that grief in a way that would help the nonprofit scene in which they were so much involved,” Ruth Haviland, former Community Foundation executive director, recalled.

The group gathered around a table at Karras’ restaurant in downtown Appleton struggling to find the right tribute to the Groths’ dedication to a life enhanced by the spirit of volunteerism. The Fox Valley already had the Red Smith Sports Award Banquet, which annually drew more than 1,000 people to celebrate excellence in prep sports and raise money for community sports programs. The group wondered if they could do the same for volunteerism. “There was no single event that focused the whole community on the tremendous volunteer resources and involvement that this community has. And that really is what makes this community so unique,” Larry Kath, president of the Community Foundation at the time, said.

The Post-Crescent brought its Janet Berry Award to the event. Created in 1982, the award recognizes exemplary volunteers who enrich the community in the spirit of the late Janet Berry, an Appleton woman who volunteered actively despite the ravages of a rare and debilitating illness. Aid Association for Lutherans (now Thrivent Financial) added its Walter L. Rugland Community Service Award, which had recognized long-standing commitment to volunteer leadership since 1985. The Mielke Family Foundation created the Paul & Elaine Groth Mentoring Award for volunteers who guide and support others.

Other local businesses followed suit to sponsor awards, including Community First Credit Union for the Youth Scholarship Award, SECURA for the Business of the Year Award and School Specialty for the Volunteer Educator Award, later named after their late founder, Dan P. Spalding. The Health Care Volunteer Award, sponsored by the two major local health care systems — now Ascension and ThedaCare — was added in 2000 and the Hanns Kretzschmar Award for Excellence in the Arts, also sponsored by Thrivent, joined in 2004.

Each adult recipient chooses one or more nonprofit organizations to receive the $5,000 the sponsors donate with the award. In addition to receiving a $1,500 scholarship, the Youth Scholarship recipient designates a nonprofit to receive $1,000. 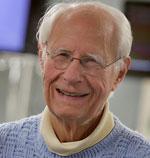 For the inaugural Celebrating Volunteers event at the Radisson Paper Valley Hotel in downtown Appleton on April 2, 1998, organizers feared they would see virtually an empty banquet hall. The event drew nearly 600 people.

“It clearly was a celebration of importance,” Dr. John Mielke said. “The hallways were just filled with people talking to each other. I got goosebumps. It was sort of a risk, I think. You’re going to throw a party, will anybody come? And they came. And they keep coming.”

Read about how the Celebrating Volunteers awards and gala came to be.