The Community Foundation held its annual Celebration of Giving on Nov. 2 at the newly opened Community First Credit Union headquarters with good numbers to share. John Hogerty, board chair during the 2016-17 fiscal year, announced to the more than 200 attendees that a record $26.8 million in grants had been awarded in the fiscal year that ended June 30, 2017. The Foundation also saw a 27% increase in contributions over the prior year and saw assets grow from $297 million to $326 million. See more in our annual Report to the Community.

Here are some of the reactions to the numbers he announced and the Foundation’s role in the community. Maung Win, personal finance counselor, RoseMarie and Maung Hla Win Charitable Fund: “I was there last week (at a reception for Himebaugh Legacy Circle members) when Curt said you got a return of 15%. I got 14%. I was glad you guys beat me. They always say, money goes where money is.” Dave Willems, lead organizer and co-founder of Mile of Music: “When you hear about the evolution of the Community Foundation, how it’s gone from what it was when it began to being the second-largest community foundation in the state, when you think about the amazing number of funds and the impact that’s had on the community, it makes a night like this an opportunity for all of us in the community to say thanks to the Community Foundation and all of the donors.” 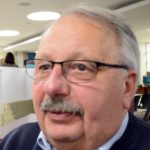